The other day I was in our kitchen and emptying the dishwasher for what seemed like, 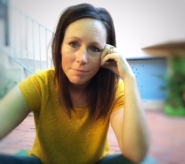 I have to say, the tenth time in two days, and I was in hurry to get off to work and, in my hurry, I dropped and broke a dish. When it happened, you can imagine, I think, my frustration – and I yelled out a “mother fucker”, loudly.  And guess who was standing a few feet away, watching me the whole time? My three year old daughter.  I grimaced and she said, “What’s wrong mama?” and I replied, “Nothing, Honey. Mama just broke a dish.”

In my head, I’m thinking, “Shit, you have to stop swearing in front of her!” (and no, the irony of my response in my own head is not lost on me). As I was cleaning the broken dish up off the floor, my three-year-old purposefully threw her doll on the floor and yelled, in her lispy-little voice, “Fuck!”

I had broken a dish on accident and cursed out of lack of self control and awareness.  She did this on purpose, but because she was mimicking me. Her words, like echoes of tarnished innocence,  played on loop in my mind, reminding me each time that,  as her mother, I had to do better, to be better.

And yet, three days later, in the car on our way to swim lessons, traffic was heavy and we were running a bit late and other drivers were being, well, annoying.  Or maybe I was just annoyed that, once again I had gotten out of work a little later than I’d liked and that set off a chain of events that had left me frustrated and running behind.  When a car changed lanes in front of me, a little closer than I would have liked, I mumbled, “Asshole! Stupid driver! What are you doing?”

“Who is stupid mama?” my daughter asked.

Again, at that moment, as her mother, I knew I had to do better.

To be honest, Mr. Trump, we don’t agree on much, but as parents, I am sure we can agree upon this: My child is my whole world, this three-year-old girl.  She looks up to me, her mother. And I’m not perfect, but I strive to be better every single day, for her.  When I had her, I became tasked with the biggest job I have ever had. I’m tasked with being a role model.  I’m tasked with leading by example in both my thoughts and actions.  I’m tasked with being more patient, more understanding, more open minded because she’s three and she can’t do those things yet on her own, I have to teach her, show her, model for her.

And then I apologize. I explain that “Mommy is sorry. I said some things that aren’t nice because I was upset.”  I know that not everything she says that’s inappropriate is going to be my fault, but I have to know that if I’m not careful about my words, these little eyes that are always watching and little ears that are always listening are going to pick up on that and will begin to think it’s OK for her too.

And it’s not OK for her too.  Right?  I think, as a parent, you’d probably agree with me there? 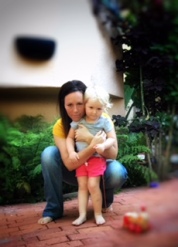 As a parent, when I unintentionally or not set an example for my daughter that is less than ideal, when I fall short, when I make a mistake, I have to acknowledge that I have done so.  I have to tell my daughter that, very clearly, so that she knows that what mommy did was not OK and that I don’t want her to do those same things.  I have to explain that I made a mistake, and I might not be proud of it, but that I want her to do better and for her to know that I will try to do better myself.  This, is my role as her parent.

So, that’s why I’m writing to you tonight Mr. President-Elect Trump.  I know you are not my parent, but you will be my President in just a few months.  And, much like I am the parent to my daughter, you are assuming the role, in many ways and albeit figurative, as parent to our nation.  And while we aren’t all three-year-olds, sometimes we still operate like them – we watch and listen and model OUR behavior on those who are leading us, who we look up to.

I shared my confessions about things I’ve said that I wish I could take back because I get it– when frustrated, we all say things we regret. And let’s face it: You’ve said some things in this campaign that some people are scared and nervous and upset about.  And, like when I broke the dish in my kitchen and yelled at the car in front of me and I didn’t “mean” it, you may not have meant some of what you said, or at least I hope that is the case, but the words are out there regardless.  Those words are out there, and people heard them.

Now it’s time for you to share with us that what we’ve heard you say in times of heated debate, stress, and just in places where you were not as mindful of your words, that the words you used that are being taken as hateful and hurtful were wrong and that, like the rest of us, you will try to do better in the future.  As a parent owns their mis-steps to their children, so that their children can learn from them, grow, and be stronger, we need you to acknowledge the mis-steps in your words for us, so that we are not modeling a negative, hateful, and hurtful message moving forward.

And just like I have to acknowledge and apologize to my daughter, you NEED to do the same for us, the nation you are going to be leading.

Because our eyes have been watching and our ears have been listening and they are now starting to mimic you. And while YOU may not have “meant” what you said, some of these people do.  And that’s scary and sad for a great many of us – those who voted for you and those who did not.

We have students in a middle school in my home state of Michigan chanting “build a wall, build a wall” in their school cafeteria, I think probably not understanding the severity, and threat, associated with their their words.

We have individuals in New York spray painting a swastika with the words “Make America White Again” onto a Little League baseball dugout.

We have restaurant managers who chase down black people and call them the “N-word” before robbing them.

We have high school students who are blockading their black and Latino peers from getting into their classes or their lockers.

In Minnesota, we have a school bathroom stall covered in graffiti with the words “whites only” and “fuck niggers.”

And we have people, on BOTH sides of the political spectrum, who are attacking others on the street based on what they “think” they know of them.

You are my President, our nation’s President.  Unfortunately, you’ve said some things during this Presidential election cycle, as have your opponents, that were hurtful and scary for many people in this nation, even for those who supported you.  But now is the time for you, like me, to remind the nation that those words are not OK, admit that they are not appropriate, remind us that they are not appropriate – just like a parent does for their child, just like I did with my daughter. You have to look at this nation, our nation, your nation, as you would your children.  They have been looking to you and they have heard you and seen you and they are mimicking you now. They are perpetuating those hurtful words and behaviors because they think it’s OK.  You need to remind them that it is not.

Mr. President-Elect Trump, I’m not just some random woman who doesn’t “get it.”  As I said, our differences aside, I get it.  I’m a Navy wife.  I’m the daughter, granddaughter and sister of Police Officers.  I’m a mother. I’m a teacher. I’m a writer. I have a Ph.D. and I am a proud American.  But I’ve “been around the block” a time or two as well and I get that the world is complex.  It’s that complexity that truly does make us great.  We need reminders of that right now, Mr. President-Elect Trump, and those reminders need to come from you.

Sincerely and with a hopeful heart and open mind,

One thought on “An open letter to President Elect Trump, from one loving parent to another”

a journey toward a fit life - forever

Plowing through Life in the Country...One Calf Nut at a Time

The Science of Mom

The Heart and Science of Parenting